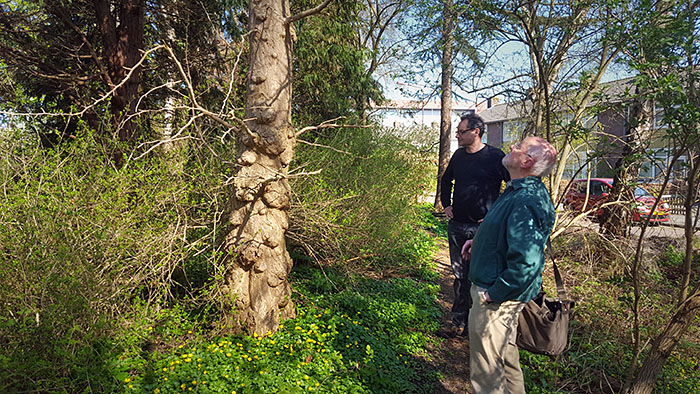 One of the prime reasons for the extent of this debate and the emergence of a new philosophy of urban landscape was the catalytic presence of Louis Le Roy, art teacher and gardener, from the northern town of Heerenveen. Le Roy successfully related the ecological arguments of the 1960’s to the urban landscape and though not always scientifically accurate, his enthusiasm awakened people to an awareness of their environment. Later he named his projects eco-cathedrals.

In his book ‘Natuur Uitschakelen Natuur Inschakelen’ Le Roy argued that the country had become divided between two vast monocultures; the rural environment, which contains such activities as farming, forestry and water catchment, and its urban counter-part with housing and industry. Sandwiched between these two was a growing extent of land in public ownership, the urban landscape. Some of this land was accessible in town or country parks but much was inaccessible in motorway verges, roundabouts, airports, etc. This situation had arisen at a time when the individual was coming under increasing pressure for space. If people are fortunate they have a ‘tiny house and garden, but cannot move without treading on their neighbours’ toes’. 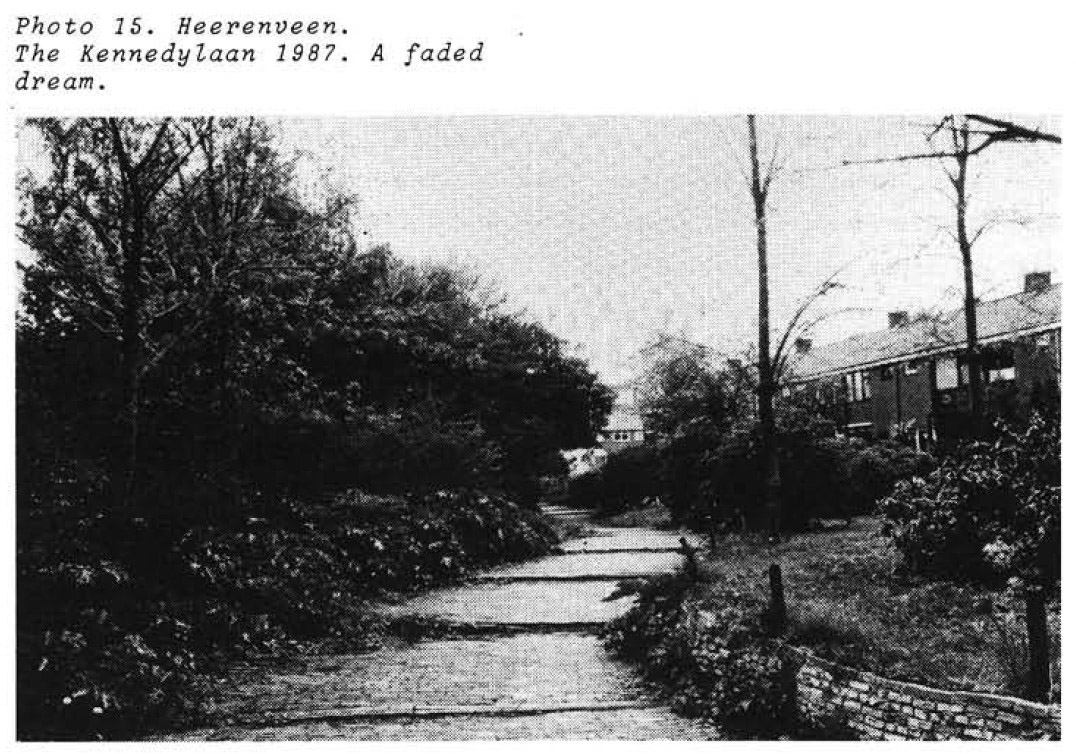 Photo: Allan Ruff, the eco cathedral in the Kennedylaan in 1987Le Roy’s opportunity to try out this ideas on a small scale cam in his home town of Heerenveen. The town council made available a central grass strip between the residential roads, called the Kennedylaan. This was situated one mile from the city centry. Le Roy’s eco-cathedral model for the artificial ecosystem showed theoretically how this area should work.

The reality of the situation in Heerenveen supported Le Roy’s arguments. The public park which was to serve as a reservoir for wildlife, although visually attractive, was biologically sterile. Broad hard surfaced paths conduct the visitor around whilst close-mown grass stretches right down into the water. Similar circumstances were repeated in the housing along the Kennedylaan where the neat and tidy gardens would provide little cover for any dispersing wildlife. Near the end of the artificial ecosystem is a large tarmac-surfaced car park, which , as Le Roy states, totally sterilizes the land and dissipates all natural energy form sun or rain.

The alternative to this situation can be witnessed barely a quarter mile away on a disused service canal. Here the derelict canal has been left to nature and a rich profusion of aquatic plants and animals has resulted. This canal is crossed by an old wooden bridge and, though designed, the wood reflects the trees form which is was cut and the hand of the craftsman who made it. There is a harmony between nature and the artifacts of man which does not exist in the public park but which Le Roy argued was essential to harmony between man and nature. Certainly on this stretch of canal people linger to enjoy the sensual pleasure of nature, whilst exchanging the time of day.

The construction of the Kennedylaan 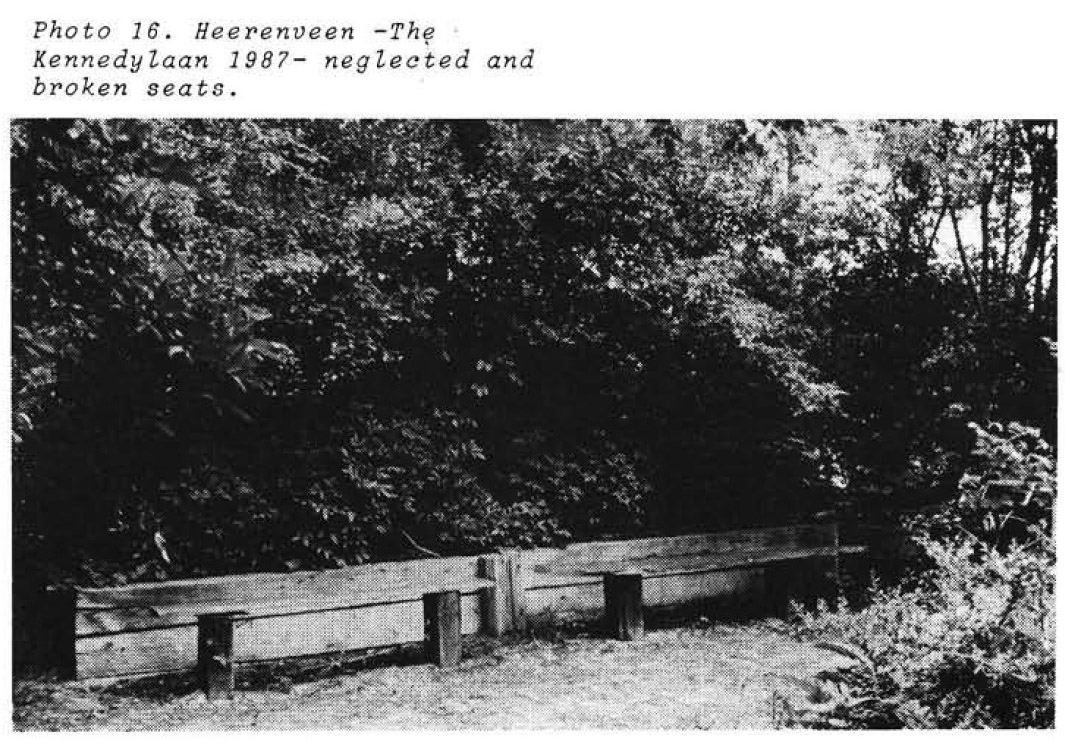 Photo: Allan Ruff, the eco-cathedral Le Roy garden in the Kennedylaan Heerenveen in 1987Such concepts as energy conservation, the spontaneity of nature and vernacular design all influences Le Roy’s ideas of an alternative urban landscape that he later called eco-cathedral

Le Roy also believed that once people were freed from the inhibitions of a plan and its dubious aesthetic values, people could create their own park – the ‘People’s Park’. In this Le Roy shared the belief of Simon Nicholson in England that for too long ‘planning, design and construction has been considered so difficult that only the gifted few, those with degrees, certificates in planning, engineering, architecture, art … and so on, could solve environmental problems’. By using inexpensive cast-off material, individuals and the community could derive all the satisfaction that comes from creativity and the assumption of this responsibility for one’s environment.

It has not been possible to provide the necessary space or to satisfy individual needs within the urban landscape. In his plan for a new city region, Le Roy proposed that the land between the two monocultures should be returned to individual use. The land being divided into parcels for small-scale food production, which, in Le Roy’s example, could be run on macrobiotic lines. These parcels would be surrounded by extensive woodlands to screen the alien monocultures. The woodlands would also provide space for the making of small ‘People’s Gardens’ and the laying out of a network of footpaths, to overcome the present deficiency in the landscape. Nature reserves would be established outside the region as reservoirs for wildlife. These would be linked to the woodlands and new artificial ecosystems would penetrate into the center of the town to encourage wildlife into urban areas.

Le Roy’s ideas touched upon a raw nerve of a society which had seen sweeping changes in both the rural and urban environments People, in Le Roy’s words, ‘were desperately seeking to find a compromise between the technology necessary for survival in the present day and those former values that had been lost or were in the process of being lost by too much technology.’

Nowhere was this more apparent than in the new suburbs which Le Roy considered were the result of architects and planners prepared only to argue over concepts and who were preoccupied with ‘squares and circles’ without which they couldn’t design. Le Roy echoed the feelings of many when he said that ‘the architects and planners lacked the necessary vision and had lost touch with the people for whom they planned and the land they managed’.

As the same time, Le Roy’s observation of spontaneous natural communities, like the growth in the disused service canal, led him to believe that nature would always create variable and therefore beautiful scenes. All that was required was a rich provision of plant materials, either ‘native or exotic for nature recognizes no distinction’. In the Kennedylaan, Le Roy used over 1,000 species of trees, shrubs, herbs, ferns, bulbs, fungi and mosses. The process of natural selection would, Le Roy claimed, create a rich and diverse habitat within seven years.

The effect of the Kennedylaan after this interval of time, was overwhelming and much of what Le Roy claimed had become a reality, though not with regard to the planting. Through its simplicity and spontaneity, both in construction and planting, the kennedylaan has a quality that is rarely found in the more conventional municipal park. It is a quality that derives from the aesthetic of nature. As one enters, all the stress and strain of the surrounding town falls away and is replaces by the sound of birds, the flight of dragonflies, the sight of snails on the hogweed stems. In the shelter of the trees the sun’s warmth is pleasant and free form glare whilst the trees make pleasing of patters on the path. The senses come alive. At weekends the Kennedylaan is full of people though not in an overcrowded was, for many of them are pursuing activities not associated with the urban landscape – children gathering seed heads for winter display or a family group botanizing with a Keble Martin. As Le Roy had said, harmony in nature brings a closeness to nature and between people, so that people stop to talk in a way that would never happen on the pavements to either side.

Although Le Roy’s ideas met with stern opposition amongst some landscape designers and parks officials who believed that he sought to replace design with anarchy, there was widespread acceptance among the people of the Randstad suburbs. In the three years after 1968, many Le Roy gardens and playgrounds were made by parents, teachers and even local authorities in response    , for example, to request from members of old people’s homes.

Le Roy helped to create a new ecological awareness in society and liberated a creative force which was instrumental in convincing people that they could be responsible for their environment.

The failure of the kennedylaan

Set against this positive achievement, the Kennedylaan and the other Le Roy gardens failed in the establishment of vegetation and the making of an artificial ecosystem. The cause of this failure must be attributed to arrogance rather than to ignorance. However, in fairness, the fact should not be overlooked that the Kennedylaan was very small for this combined experiment, being only 18 metres wide and 1,5 kilometres long. Once it proved successful there was bound to be a conflict between people and nature. The collection of seed heads, for example, was also the removal of a seed source for wildlife and continuation of species in subsequent years. But Le Roy also overlooked the fact that not all plant communities are species-rich and attractive. Many are dominated by a small number of highly competitive species. The appeal of such species as Nettle (Urtica dioica) surely must lie in their scarcity and this diminishes as numbers and extent increase. The competitive strength of plants was also ignored, although this fact has been recognized and respected by generations of gardeners. The folly of such unusual interplantings as Festuca ovina Glauca with Sow Thistle (Soncus olearaceus) was  not the visual appearance, but that the more competitive thistle will always exclude the grass. Although Le Roy would claim that this was natural selection at work, this fact was already known and the Festuca was therefore lost needlessly. Equally ill-considered was the random tree planting. In one section willow, elm, birch and sycamore had all been planted in the same light sandy soil, yet the willow species prefers a moist humus soil, the elm a deep fertile soil, and though the birch was suited, it is likely to be suppressed by the sycamore. This species will cause a heavy shade reducing its attraction to wildlife and visitors alike.

The effect of competitive exclusion and wear and tear, resulting form increased use and the removal of plant material, caused the Kennedylaan and the other Le Roy gardens to move towards uniformity rather than the promised diversity. By the early 1970s there was a general disillusionment with the Le Roy’s ideas, and though his criticus saw this a a victory, the ‘self-destructive’ element of his work may have been its greatest asset. Had the gardens been entirely successful, Le Roy’s ideas would have further exacerbated the division between the community and the local authority Parks Department. As it was his catalytic effect was to bring people and Parks Department into closer partnership, both concerned with creating a more satisfactory human ecosystem. As Bengtsson and Bucht summarized it, ‘it is important …. that along with the vegetation we also create not a complete environment but one which is in a constant state of change. If residents are to appreciate their immediate environment, they should not be presented with it as a ‘fait accompli’, but should be allowed to help create it. Planning for care and change in the vegetation of a housing area could hopefully be a means for assembling residents for regular discussion of common problems in the external environment.

How true this was to become in the new social landscape will be shown in subsequent Chapters, beginning with the first experimental landscape by a local authority at Delft in the late 1960s. 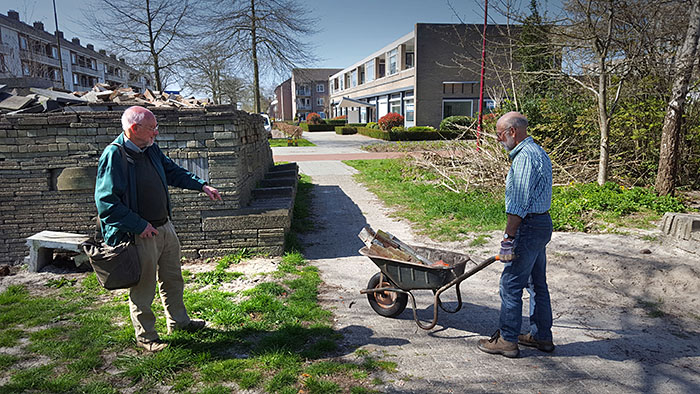 This is a paragraph from Allan R. Ruff his study "Holland and the ecological landscape" from 1979. in 1987 he published a new version with conclusions about the past years . Read the complete document from 1987 in PDF16.24 MB

Allan R. Ruff is a landscape architect who taught at the School of Landscape at the University of Manchester from 1972 to 1990. As the Director of Landscape Studies at Manchester he established the first Master's Degree course in Land Management in Europe. In 2015 he published his book "Arcadian visions; Pastoral Influences on Poetry, Painting and the Design of Landscape"

Rondleiding of lezing over ecokathedralen?